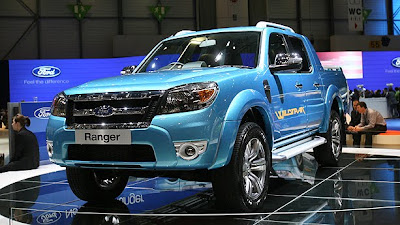 Thats right! The rest of the world gets the Thailand designed 2011 Ranger and we are still getting by on the old school version from 1983. I love my truck, but I would like to see a little more then what they are offering now. The current design is proven, tough and mighty, however, it would be nice to see an updated version. The current Ranger is the most fuel efficient American truck sold, lets see it develop more into a truck that the masses are looking for.

Rumor has it, the new Ranger will be powered by the Ecoboost 1.6L I-4. I don't have any horsepower numbers on it yet, but I would bet it would beat my Duratec at the race track. I would love to upgrade to one of these in the future. Hopefully Ford will bring this truck here for us to enjoy. They should continue to call it Ranger as well, the F-100 thing would be too confusing.
Posted by James Piper at 4:08 PM 3 comments: 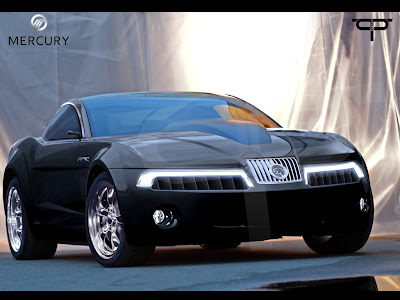 This concept car was something I found on another forum. I can see this Cougar being made from a Mustang with more luxary features and interior appointments. Maybe throw some shiney 20" wheels, chrome everywhere in the interior and some other items to compete with Cadillac coupes. A big Ecoboost engine would be nice as well. Its time for another personal luxary coupe, hopefully Ford will listen to people who would like to see this.

Too bad Mercury may not be around much longer.
Posted by James Piper at 4:19 PM 12 comments: 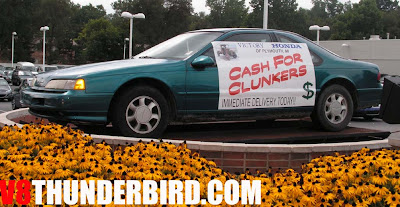 Here is something that I was afraid of, a 1993 Thunderbird with a sign for Cash For Clunkers! It looks like a V6 model, which doesn't qualify for the program. Its pretty much just a prop for them.
Posted by James Piper at 7:31 PM No comments:

Video of my 1995 Thunderbird at Lapeer Dragway!

Here is my 1995 Ford Thunderbird in action at Lapeer Dragway, July 2008. The other car is a Pontiac G6 GXP.

Get the whole story at http://www.v8thunderbird.com

Done for the season! Driveshaft and 3.73s coming! 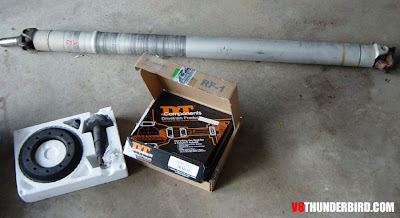 Its been awhile since my last update, I have been out having fun with the Bird! We went to the Downriver Cruise, Milan Dragway and other madness. She is running good, she has came a long way since I bought her a year ago. She got some new Autolite Platinum plugs before I put her away for the year. She is sitting under a Dupont tyvek cover now, waiting for spring.

We picked up the above at the end of the season. She is getting 3.73 gears and a 1993 Lincoln Mark VIII aluminum driveshaft installed when Spring rolls in. The gears are Ford Racing (made in the USA) and a Timken re-build kit. The Mark VIII driveshaft was from a cash for clunker car. Before I found this one, I bought a two peice version that is on the 1994-1998 Mark VIIIs. For one reason or another Ford decided to change the design of the driveshaft after a few months to a two peice design. While I still think that the one piece would have worked, I couldn't resist buying the more desirable one piece. A lot of people think that a driveshaft change is not needed, but as I learned, our driveshafts are very long. After the gears are installed, the shaft will be spinning faster, which could cause some vibration and eventual failure. After this is installed, I am hoping for low 15s or high 14s. We will see if I can get any traction out there.
I have looked into body work and will be saving up for that after this is done.

Posted by James Piper at 7:08 PM No comments: 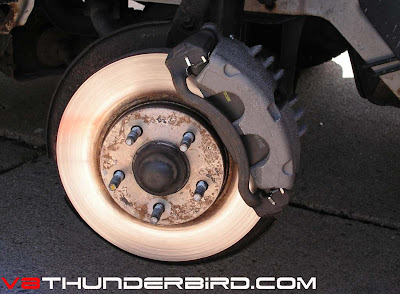 Over the last few months, the Thunderbird has been getting a lot of repair work done. We started out by replacing all brake components other then the lines. We used 1999 Mustang dual piston aluminum calipers made by PBR, Monroe Mustang ceramic pads, new drums for the rear and Morse Ceramic brake shoes. Before the upgrade, I had air in my brake system, so I can not asses the improvement. I can say that I am satisfied with the result of this upgrade.
My front suspension was totally replaced with all new hardware. I used Moog strut bushings, Moog Ball Joints, Moog control arms and Monroe Sensitrac Quick Struts due to the excessive cutting to get the old parts out. The whole setup was never changed before (from 1995?!?!), so you can imagine that getting bolts out was a real treat. I am very happy with the Moog componets, I just wish I bought their endlinks. The middle of the road endlinks I bought worked but they were kind of odd.
For the rear, we used Monroe Sensitrac shocks but left the rear stock springs for now. The rear springs will be done in the future. We also replaced the rear stablizer bracket.
Rounding out the upgrades, new Ford OEM floor mats was added to the interior.
All of the pictures are at http://www.v8thunderbird.com ! Check it out! 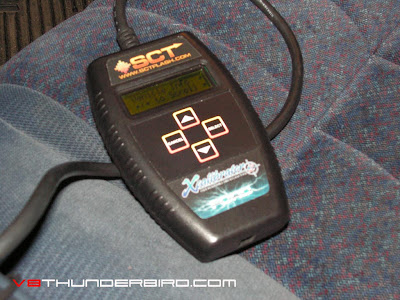 The Thunderbird is coming together nicely. The car has had some upgrades for looks and performance. The Kenwood CD player is a vintage unit from 1995, which replaced the stock unit that was incorrect. The speakers were replaced with two sets of Pioneer 3 way speakers. The sound is much improved over the old system.
Another upgrade is a SCT XCAL2 hand held tuner. The tuner allows for three programs, which include 87 octaine performance, 91 octaine performance and a 93 octaine track program. This unit also helpful for troubleshooting issues with the car. It provides information on sensors, air/fuel and other information. The tuner hardware is provided by Fordchip.com.
Rounding out the upgrades include new headlights to replace the nasty yellowed ones.
See it all at http://www.v8thunderbird.com
Posted by James Piper at 6:57 PM 1 comment: 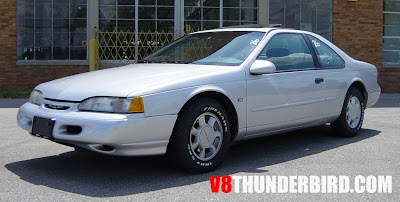 Back in March of 2008, I purchased a 1995 Ford Thunderbird from a dealership in Taylor Michigan. I was looking for a V8 car with good miles and a solid body. This 1995 was the best avaiable car that was close to home. It spent its whole life in Ohio, sold at auction and was transported to Michigan.

When we bought it, we noticed some things right away that needed to be fixed. It needed a battery, pulleys, windshield whipers and tires. We got the pulleys and the battery on the way home from the dealership (they put a GM battery that had side terminals on a Ford, the posts were within inches of the body, not to mention it was the wrong size). Gotta love used cars!
We also noticed that it had the valve body buzz. We did not notice it when we bought the car so that had to be fixed right away. My buddy was able to do it in my garage over two weekends. I wasn't too upset, I knew that a car this old would need work. I also got the updated valve body design and the transmission got a flush of Mercon IV.
I replaced the Walmart Goodyear Viva II tires with Firestone Firewalks in the 215/70R15 size. This is the original size that the car came with.
Going from a Vulcan Taurus to a Thunderbird V8 is awesome. While I was happy with the Comet's pick up, it doesn't hold a candle to modular V8 power. While this car still need some work, I am very happy with it. I am sure that I will have many years of enjoyment from it.
Posted by James Piper at 6:49 PM 1 comment:

Welcome to my Ford Automobile Blog!

This blog will show all of my Ford projects, including some older ones that I have done in the past. I currently have a 1995 Ford Thunderbird, 2002 Ford Ranger XLT and a Mazda Mazda5. I have been a car guy since I was 16 and I have always had Ford cars and trucks.